Sorry for the lack of posts lately — I’ve been busy slaving away at Return to Shadow, which I’m sure you’d all rather read anyway! Here’s a guest post from another author who writes in a similar western mashup genre to mine. Don’t forget to download her book for free! (It is the holiday season, after all, so grab a gift for yourself). Without further adieu, here’s Kyra:

Hi everyone, Kyra Halland here to introduce Derek’s readers to the fantasy-western world of Daughter of the Wildings. As a special gift for you, Book 1, Beneath the Canyons, is free today only, on Amazon: http://www.amazon.com/Beneath-Canyons-Daughter-Wildings-Book-ebook/dp/B00P6TUSM0 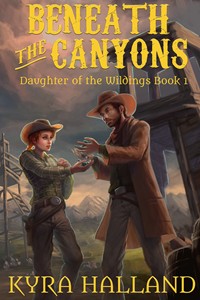 Out of the dusty desert hills he rides into town, the nameless stranger astride a horse as toughened with hard experience as he is. The wide brim of his hat conceals his eyes and unshaven face in shade; his long brown coat, much patched and mended, blows open just enough to reveal the six-shooter holstered at his hip. He seems to be just another wandering gunfighter, but that gun can do things no regular gun can do, and, on a silver chain hidden beneath his shirt, a ring set with a blue stone glows with the strength of his magical power.

This is no ordinary gunslinger.

Meet Silas Vendine, the hero of Daughter of the Wildings, a high fantasy series inspired by the American West of the late 19th century and the traditions of classic western novels. To me, fantasy and western are two genres that were made to go together. Desolate and mystical landscapes;  confrontations between good and evil; characters who don’t fit into ordinary society, who are trying to make a new start in life or find justice, revenge, redemption, or just a ton of riches; epic journeys where simply surviving is a victory – you’ll find all of these elements and more in both fantasy and westerns. Silas, my gunslinger who is also a mage, fits into a long tradition of fantasy and western heroes: the mysterious man with extraordinary skills and strengths, a loner, who has his own mission in life and his own moral code that doesn’t necessarily agree with the accepted conventions.

But it isn’t just the similarites between the two genres that inspired me to combine them. The contrast between the down and dirty struggle for survival that was life in the Old West and the otherworldly wonder of magic, and between the rough technology of the late 1800s and the traditions of magic and fantasy, are ripe with storytelling possibilities.

The landscapes of the West are another inspiration. I was born and raised in the West, and still live there. I love to set my favorite genre, fantasy, in the wide-open landscapes I grew up with, the snow-covered peaks, evergreen forests, grassy rangelands, and rugged desert hills and dry riverbeds. Mountains and deserts especially play an important role in my writing. Mountains are places where the earth and the heavens meet in a mystical joining, while in the desert, things are hidden, buried, waiting to be revealed by an angle of the light, a rainstorm, or fortuitous digging in the right place. Both mountains and deserts hold deep secrets and power and history, and demand the utmost in skill and courage of those who journey or live there.

Westerns with science fiction or fantasy elements set in our world are becoming more widespread, but in Daughter of the Wildings I wanted to put the familiar western elements into a world that isn’t ours, where magic is pervasive and well-known. Gamblers play cards in the saloons – but the cards have names like Moon Mage and Star Dragon. The A’ayimat, the indigenous people of the Wildings, have blue-toned skin and golden eyes, and can understand any language that is spoken to them. Clocks with numbered hours, eyeglasses, and guns are the products of foreign science and are forbidden in the civilized, mage-dominated land of Granadaia. Cowboys herd cattle out on the open range while groviks – think furry alligators with rabbit-ears – roam the mountains. And on the night of the dark of the moon, when the eight gods hide their faces from the world, that mournful howling you hear could just as easily be a coyote, a demon, or lost and lonely spirit.

In Daughter of the Wildings, Plain, or non-magical, people have come to the Wildings, the vast wilderness beyond the mountains, to escape oppression in Granadaia. But there are also renegade mages who can’t resist the lure of freedom from the Granadaian laws and the promise of riches to be found in the Wildings. These lawless mages threaten the freedom and safety of the Plain settlers. Silas Vendine is one of a small number of mages who work for the rights and freedoms of Plain folk. He has come to the Wildings as a bounty hunter, authorized to hunt down mages who defy the ruling Mage Council’s authority, and also as a freedom fighter, vowed to protect the Plain settlers. Though he makes his living as a bounty hunter and gunslinger and lives a hard life, he has a strict sense of justice and of right and wrong.

The settlers in the Wildings fled from cruel oppression by mages, and they hate and fear magic and mages. Lainie Banfrey, the heroine of the series, is the daughter of a Plain settler but was born with magical power inherited from a mage ancestor. She’s always been taught that mages are heartless, soulless monsters, and she’s terrified of turning into a monster herself. But she’s also drawn to her magical power and longs to be able to use it to help the people around her.

When Silas comes to the town of Bitterbush Springs on the trail of a renegade mage and a dark, mysterious magical power, he meets Lainie in the aftermath of a shootout between feuding miners and ranchers. Brought together both by necessity and a growing attraction to each other, they struggle to survive through dangerous adventures, develop a deep love for each other that’s strengthened by hardship and happiness, come into magical powers they never dreamed were possible, and fight to protect the Wildings from enemies who threaten the land and its freedom.

Beneath the Canyons (Daughter of the Wildings, Book 1):

Silas Vendine is a bounty hunter authorized by the Mage Council to hunt down rogue mages who defy the Council’s authority. He’s also a freedom fighter, committed to protecting the non-magical people of the Wildings from the overreaching ambitions of mages both law-abiding and lawless. Between the desperate renegade mages he hunts, the hatred of the Wildings settlers for wizards like him, and the risk he’s taking in fighting for the ordinary people against his own kind, it’s a dangerous life, and Silas knows it. Still, when he comes to the town of Bitterbush Springs, he finds far more trouble and excitement than he bargained for…

Silas is trying to find and capture a rogue mage who has brought Bitterbush Springs to the brink of open warfare. There, he meets Lainie Banfrey, a young woman born in the Wildings who is both drawn to and terrified of her own developing magical abilities.

Silas and Lainie team up to stop the lawless mage who has torn Lainie’s hometown apart. Their hunt takes them deep beneath forbidden lands held by the hostile A’ayimat, where only Lainie’s untamed, untrained gifts can save them from the rogue mage and the dark power he has discovered.

Book 1 of Daughter of the Wildings, Beneath the Canyons, is now available at Amazon (coming to other ebook retailers in Feb. 2015). You can get it for free today only, December 17. 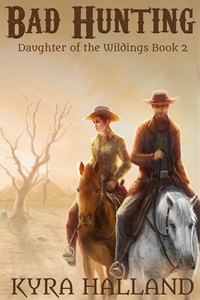 For more information about the Daughter of the Wildings series, including excerpts, character interviews, and cover art and descriptions for all six books, visit http://www.kyrahalland.com/daughter-of-the-wildings.html

Where to find Kyra Halland: