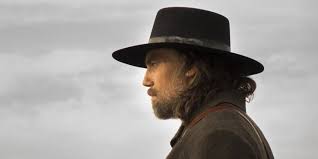 Just finished the last episode of Hell on Wheels. Rather than go on and on, I’ll leave things to the writers of the show, who penned an amazing closing speech that Colm Meaney delivered on point. Enjoy.

Five years ago, the American people, torn apart by war, cried out into the darkness, and turned a hopeful ear to the void for an answer. Americans needed a dream, and I gave them one: a Transcontinental Railroad that would unite this nation. Dreams don’t come pretty. They don’t come clean and they sure as hell don’t come simple. They come true.

Truth delivered by lies is no less true and dreams made reality by falsehood are no less real. Seventeen hundred and seventy-six miles of iron track — that is what I delivered. Track up on which thousands of wheels will now revolve, carrying on their axles the wealth of half the world, drawn by the iron horse, darkening the landscape with its smoky breath, announcing to the world with its piercing scream that we are a great people who can accomplish great things.

Yet the American people, driven by their cowardly representatives in Washington are in need of a villain so here I sit, elected by you to play my part — the part of the scapegoat. The patsy sent into the wilderness so that men sitting in this room can lay their sins upon my back and claim they themselves are clean men, enjoying immunity while enriching themselves on the backs of those who sacrificed everything to make manifest America’s destiny.

Blood as been spilled, lives have been lost, men have been ruined. I saw it and I survived. I will not return from the wild having made America’s dream reality only to have six bureaucrats in starched collars judge the manner in which I realized that dream. Put me on trial. Lock me in prison. Erase me from the record. For history is written in pencil and the truth is carved in steel across this nation. And one truth above all others is this: Without me and men like me your glorious railroad could never have been built.