A long time ago in a galaxy far, far away…

I can’t remember the first time I saw those pale blue words emblazoned across the screen, but it was probably before I could read them. What I do know is the resounding trumpet blare of the main theme sounded a clarion call within that I still feel today. And now, it’s all coming back.

Star Wars has always been part of my life, seed of the hero’s journey in my world. Sure, I grew up alongside Harry Potter and got into Tolkien just in time for The Fellowship of the Ring to hit theaters, but there’s a special place in my heart that belonging to that galaxy far, far away.

Thinking back to my chilhood, there are more memories of Star Wars than almost anything else, westerns being the only other genre that held as much sway over my imagination. I rushed through the trees of the forest moon of Endor on my battery powered four-wheeler. I cranked the levers on an old horse-drawn hay mower in our backyard, blasting the Falcon into hyperspace and navigating numerous X-wings through the trenches of the DEATH STAR. My first lightsaber — an elegant weapon from a more civilized age, crafted from a narrow length of lumber and painted green by my parents, complete with a duct tape hilt — sliced through more stormtroopers and sith (disguised as cedar trees) than I can count.

Although I was only eight years old when Star Wars returned with The Phantom Menace, it felt like I’d waited a lifetime to return to my beloved galaxy. I devoured both the contents and snippets of information on Pepsi cans about Anakin Skywalker and Obi-Wan and Queen Amidala. For Halloween that year, my mom won herself Mother of the Year by painstakingly tailoring my own set of Jedi robes and I dawned the mantle of a young Kenobi (complete with a clip-in padawan braid and, for some reason, Qui-Gon’s lightsaber).

As I grew older, my green saber was replaced by a sturdier one like Obi-Wan’s. Soon after, I collected the ultimate prize — a purple Mace Windu saber that lighted up and made noise when it struck something or was activated/deactivated. You could swing them as hard as you wanted with no fear of collapsing the blade. I spent countless hours on the front lawn,locked in duels to the death with cousins (”you can’t use that arm, I chopped it off!”). As the welts could attest, we didn’t hold back.

The action, adventure and grand setting of the space opera made Star Wars king in my early years, but it wasn’t until I began writing (and reflecting on the beginnings of Teutevar Saga) that I realized the extent of its influence on my creativity, imagination and life in general. Like Luke, I was (and still am) that farmboy, dreaming of a grand destiny, believing there’s something more out there I was meant for. Anyone who’s read Out of Exile will see similar hopes and frustrations in Revan as he outgrows his childhood surroundings and sets off on his own adventure. 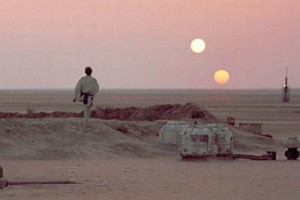 When I stop to ponder, that’s what Star Wars really means to me: hope. The hope that good, no matter how small and insignificant it seems can triumph over evil, hope we can change and grow into something greater (even if we’ve fallen): a slave who became the Chosen One, who fell into darkness and redeemed himself overthrowing an Emperor, a farmboy who became a Jedi Knight, a smuggler who became a general and a princess who founded a republic. No matter how daunting your dreams appear, just remember: even Jar-Jar became a senator.

Whenever and wherever you see The Force Awakens, I hope you’ll take moment before that golden text crawls and the trumpets blast to remember the wonder and hope Star Wars first inspired in you. Remember what it was like to feel like you could take on the whole Empire by yourself. Then look around — that galaxy far, far away is really right here, right now and it’s waiting for a hero.

There’s been an awakening. Your destiny, it’s calling to you. Just let it in.