I can hardly believe this is the sixth week since I’ve began this little venture. Time flies by when you’re having fun they say and I’ve certainly been busy having fun. Before I wax philosophical and nostalgic on everyone, let me give you a few updates. 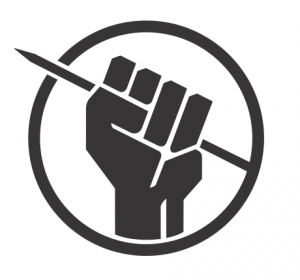 I’m overjoyed to announce the launch of Undaunted, a publishing company that began as my brainchild last fall. Now, with the help of several great people, we’ve been able to launch. Three cheers to the Undaunted Team. Please take a moment to look at the website, but I’ll also give you a summary of what we’re about here: I truly believe Undaunted is the forerunner to the future of the publishing world. We’re doing groundbreaking things by combining the best aspects of both traditional and indie (self) publishing and it’s going to be a fun ride.

Speaking of fun, Book Two is coming along nicely at a rate of 5-6,000 words per week. I’m getting close to moving into what I’ve defined as the final third of Ravyn’s tale for this book and let me tell you, it’s going to be a blast to write. Once the first draft of Ravyn’s POV (point of view) is wrapped up, it’s time to march to war. When we last left them, the Imperium League and the Free Countries (The Simarron and Loriad) were really not getting along. Don’t you worry though, I’ll be on the front lines covering the start of the war between them (hopefully I make it out to tell the tale).

With that being said, let’s get to the heart of today’s post. About a week ago, I was down at our barn after work checking on the sheep and cleaning out pens. It’s mindless, stinking work and a really great opportunity to do some self-contemplation and good thinking in general. In the middle of my task, I couldn’t help but reflect on my writing and the daily grind at it I’ve come to love since 2014 began.  I also had a flashback to ten or so years ago, when I was down at that barn going about the same task.

Our barn, or “lambing shed” as it’s called isn’t what you’re probably picturing. It’s just over thirty feet from front to back, and is divided into thirds: an aisle and with four squarish pens running down each side. It’s red with a green tin roof and a big white “rocking S” (that’s our brand) painted on the side that faces the road. The roof slopes to one side, so if you’re standing on the east side of the shed, or in the aisle, you can stand up. If you’re on the west side, (haha, west side) you’d  have to duck your head because it’s only five feet or so from ground to roof. 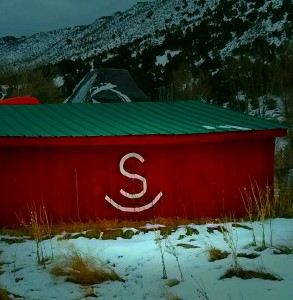 It’s not quite as picturesque on the inside…

Anyhow, it was late summer and I was just about to start seventh grade (I think). Rocky Mountain Power had a backhoe on the farm to remove/replace power poles on our property. My grandpa Fritz was a pretty enterprising individual, so before they finished the project, he had them replace a post in our stack yard…and one other small job.

Although my parents beg to differ, I’m pretty sure the lambing shed hadn’t been cleaned out in its entire existence. As a result, there was between two and three feet of manure built up within. It was tall enough that you had to duck to get through the door and remain hunched over unless you wanted to hit your head. My grandpa decided he’d had enough of that, so he had the backhoe reach in the front door and take a scoop out. Well, that meant the rest of the shed needed to be cleaned out…and I was given the job.

Let me try and paint an accurate picture: if you laid the shed out like a grid, there would be eight squares of pens and four more for each section of the alleyway totaling twelve sections. Minus the square the backhoe took out, there were eleven left. This wasn’t a soft, squishy two and a half feet of crap either. It was layers and layers of straw, muck and clay so hard that I couldn’t use a shovel to dig through it. This required more sophisticated weaponry. I enlisted a pickax and manure fork.

I’d swing the pickax overhead (carefully because there wasn’t a lot of ceiling clearance to start with) and, half the time, it bounced off the top layer. Once I beat it loose with the pick, I’d jam the manure fork between the layers and try to pry the top one off to haul it out. It was like being on an archaeological dig, uncovering layer after layer of organic cement, peeling year after year of petrified waste away. I wish I’d taken pictures.

It took months. Each pen took days to finish and when I’d stop for the day, I could barely make a grip with my hands. (I loved that part, though. I thought I was getting ripped). It was hot and dry and dusty. I started in September and didn’t finish completely until November. Seriously, I wish we’d taken pictures.

So why am I telling you this? Why did I double my regular blog post length for this particular story? Because it hit me, the other night when I was down there, thinking about writing book two. Writing a rough draft is like forking manure from a barn. It’s long and unpleasant, but, little by little, you get the barn cleaned out. Little by little, you have a book. There’s a lot of days when you don’t want to do it, but you keep hauling crap until you’ve accomplished something. Neither is a neat and tidy job and they aren’t supposed to be. What matters is that they’re done.

In the end, when I stood (and didn’t hit my head) in the lambing shed, I was a pretty proud guy. I felt like I’d achieved something.  It might sound ridiculous, but it’s a rare feeling that I hope each and every one of you have felt and feel again. Few things match that moment ten years ago. Graduating college was close, but it wasn’t one of them. Completing the final revision for Out of Exile sure was though.

3 thoughts on “Third time’s a charm: Manure and manuscripts”