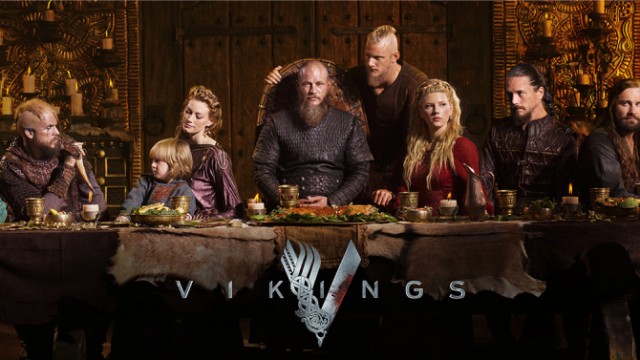 Vikings Season 4 Episode 1: A Good Treason Review
Watch here
Synopsis: Entry to Valhalla eludes Ragnar but as he lies in his sick bed in Kattegat events unfold beyond his control. Bjorn orders the arrest of Floki for Athelstan’s murder while in Paris, Rollo betrays the last of his Viking supporters to strengthen his position in the French Court. Meanwhile, in Hedeby, Kalf announces joint Earldom with Lagertha, but is power-sharing Kalf’s true intention and is Lagertha actually willing to share what once was hers?

Recap
Skol! After a long year’s wait, Vikings is back!

My, my what an ominous beginning. Ragnar takes a journey through the spirit world, but is barred at the gates of Valhalla. The question, though, is the reason because it’s not his time to die or because Odin has forsaken him? Meanwhile, we’ve got to wonder what Aslaug has up her sleeve…is it a dagger meant for Ragnar’s back?

Immediately we see just how much time has passed from the growth of Ragnar’s sons and Bjorn’s daughter — at least two years by the look of it. I couldn’t help but notice that Ivar, handicapped as he is, was the fiercest of the boys. A sign of things to come, perhaps?

Things heat up right away when Bjorn orders the arrest of Floki for Athelstan’s murder. Although everybody seems to go along with it, I can’t help but think this is going to lead to division in Kattegat. It’s no secret that Aslaug hates Christians as much as Floki and it’s no stretch to see her authoring a coup while Ragnar continues to recover. I don’t think there’s any saving their marriage at this point.

By the look of things, Lagertha has stepped into a viper’s den in Hedeby. Kalf pulled a fast one on his followers by sharing his power with her, but is anyone really convinced he and Lagertha can both be content with only a piece of the pie? I don’t think so. Things are going to get even more bloody, but I’m sticking with Lagertha. Poor Einar is one traitor our shieldmaiden won’t have to worry about at least. I couldn’t help but notice how quickly our Vikings have adopted the use of the crossbow, too.

A Good Treason is doing a great job foreshadowing the season…and seasons to come. Bjorn examining the map hinted of great things in store for our young Lothbrok. He’s still got a long way to go, however. Between leaving Rollo behind in Frankia and arresting Floki, he’s made a real mess of things. Even so, Ragnar still loves and cares for his eldest son…even if he only shows it when Bjorn isn’t around.

Speaking of Rollo, he’s living that Paris life — living it large. Since we last left him, it seems he hasn’t quite won the adoration of his betrothed. Looks like she’s gone from the anger stage to complete depression over the arrangement. She’s certainly not a blushing bride, nor does she swoon over Rollo’s six pack and sweet tats. I got a few chuckles out of their bedroom scene. It’s too bad they transitioned right into an old bickering couple.

You almost feel bad for Rollo being all alone and friendless…but then he turns into a major d-bag there at the end. Like Erik, I sure hope Ragnar comes and avenges them.

I already can’t wait for next week! That teaser after the episode promised amazing things to come. What are you most looking forward to in Season 4?