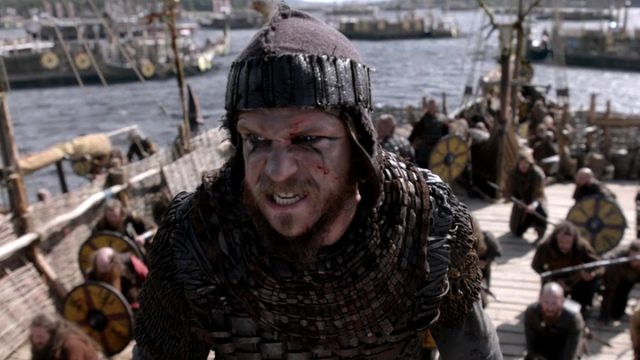 Official Synopsis: A ferocious battle between the Vikings and the French eventually comes down to Ragnar against Rollo and the outcome seals the fates of the two brothers.

This week had it all and my mind is still spinning. Things kicked off with a good old fashioned Vikings whooping on the Franks with Ragnar tottering around like death warmed over. If it had been anyone else leading the Franks, they would have turned tail and ran. Instead, Rollo put some good old fashion Vikings iron in their hearts and they charged forth again, ready to make in an actual fight for the second round.

Although it was a short break, the scene of the Emperor’s Red Dinner (as I’ve decided to call it) was fantastic character development. I, for one, definitely underestimated Charles but it appears Rollo’s put some Norse ferocity in him as well. He’s definitely not the same guy who cowered when the Vikings sacked his city the first time. There’s plenty of bark and bit to go around, as Roland and Therese found out. Damn. I love how this show turns on a dime who no warning.

Meanwhile, the matchup we’ve all been waiting for comes to head as Ragnar and Rollo meat in the deathmatch of the ages. There’s so much epicness going on, the Seer can’t do anything but roar — probably in agony because he can’t witness it firsthand.

As Ragnar and Rollo make the reads like Muhammad Ali and Joe Frazer, we see our beloved Vikings bleed…a lot. Floki escapes death, Halfdan gets shot in the heart and Lagertha’s Valkyrish battle-luck finally runs out. Her fate after the battle is uncertain, but I’m pretty sure I caught a glimpse of her in the teaser for the second half of the season.

I know I’ve talked about it all season, but once again, I love the clashing religious themes of the weeping Virgin Mary statue and the Vikings arm ring coming together. It’s a credit to the writers that they can present both religions and their followers in a way that doesn’t hit you over the head but thematically holds up the backbone of the series.

Rollo and Ragnar pummel each other to pieces (I’m going to call it a draw), but the Vikings retreat and take their king with him, broken in face and in spirit. Rollo, seemingly still harboring a small sliver of love for his roots, let’s them go. He looks like he’s fought enough for one day, anyway. I think that same small part that showed the Vikings mercy also wished Rollo could go with him.

That’s soon, erased, however, when what’t left of Rollo returns to Paris for the hero’s welcome of the century. The cost of has taken it’s toll on his body as he stumbles to the finish line, but never before have we seen Rollo’s spirit soar to these heights. Against all odds, he’s won the hearts of the Gisla, Paris, and the Emperor himself — love and loyalty he’s been looking for his entire life. No matter how much we all hate him for betraying the Vikings, you can’t help but root for Rollo, too in that moment. He’s found his destiny.

Back on the longboats, things aren’t so cheery. Everything his hacked to pieces and the remnants of the Vikings seem shattered to the core. But wait…there’s still half an episode left!

I wasn’t expecting a ten-year leap forward but it was handled perfectly. We open up with Bjorn doing a little fishing, sporting an uber long hair braid. Next thing we know, the beans are spilled. Bjorn and Aslaug learn all about Ragnar’s dirty little secrets and shenanigans in England.

Bjorn appears shaken but Aslaug seems pretty smug about everything. I couldn’t help but notice she’s sitting in a fancy new hall. Times must be good. I’m interested to know how her and Aslaug have apparently thrived and shared the power in Ragnar’s absence.

Next, we meet Ivar and the rest of Ragnar’s brood, half-grown and as vicious a group of young Vikings as you’ll ever find. I love the conversations between them and found it surprising Ivar stood up for Ragnar’s actions the most. Bjorn seems to content to play the role of observer as the others sort out their father’s legacy and their conflicted emotions about him.

Amongst the new faces, an old favorite returns. Floki’s still building boats for the Lothbrok’s, now bigger and better ones Bjorn intends to sail to the mysterious Mediterranean in. He’s showing his age, but is still up for adventure into the unknown. After everything that’s happened between Floki and Ragnar’s family, it warms the heart to see them bosom pals again. Of course Floki is going with him.

There’s a lot of exposition going on in the second half, but it hits you so fast that you don’t even realize it. Just when something seems to be answered, we’re presented with a hundred different question. But then:

Of course he does. When our old friend steps into the outskirts of town, we see for the first time just how massive Kattegat has become and how much the Vikings are thriving. The streets are packed with wealthy townsfolks and dozens of foreign merchants hawk their wares. The Vikings have certainly reaped the rewards of Ragnar’s deeds, even if they’ve become disenchanted about their former king while he was on sabbatical.

The showdown between the king and his sons (Bjorn and Aslaug notably absent) was classic Ragnar. I’ll note again that Ragnar and Ivar’s relationship seems to be the strongest — not what I would have expected but hey. The message is clear: Ragnar doesn’t car how tough his sons think they are or how long he’s been gone. He’s going to call the shots for as long as he wants.

Man, that was a hell of a return speech. You can’t help but love the raw emotion that Vikings evokes in you when you watch it. My blood was boiling. THAT is awesome TV, people.

WHO WANTS TO BE KING? Nobody, while Ragnar still draws breath.

Alright, everyone, I want to hear your predictions for the second half of this season! Post them in the comments and we’ll discuss.