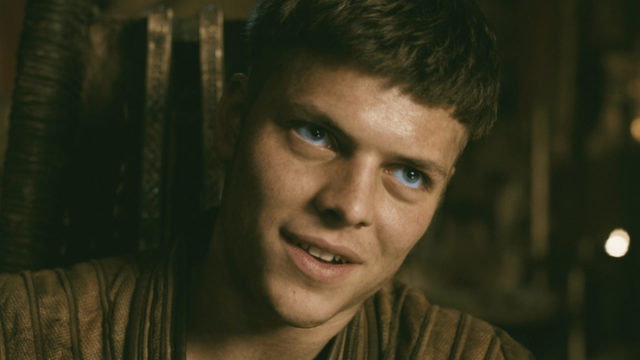 We’re right back with the second half of season four and it couldn’t have come fast enough! When we last left Ragnar, he was preparing to square off with his sons upon his return to Kattegat. And who wanted to be king? It looked like Ubbe, for a moment, but in the end he embraces his long-lost father. There’s clearly some conflicting emotions between Ragnar and his sons. On one hand, they’re begrudgingly glad he’s back, but on the other, they know he’s going to turn their world upside down. “Calamaties too many to number,” as the Seer says.

I’m really enjoying the interactions between Ragnar’s sons and am looking forward to seeing how these relationships are tested throughout the season. Ivar is such a dick — but you get the feeling he’s the one who inherited the most of Ragnar’s moxy, maybe even more so than Bjorn.

At first, Ivar is painted as a complete tool, but there’s an interesting flip as we see him crawling around in the following scenes, catching his brothers with the slave girl he clearly has his eye on. It’s a humbling experience, no doubt, and in the following scene when the sons go training, we see more of Ivar’s strained relationship with his brothers. He’s missing out on being a young Vikings hooligan — chasing girls and fishing.

Just when you think they’re having a go at him though, they set up this romantic getaway for him and the girl. What ensues is an excellent portrait of Ivar’s character at the moment: he’s hard yes, but brittle. He’s still coming to terms with his setbacks and yet to reach his full potential. Margrethe’s pep hits home, even though it’s the same thing his brothers have been trying to tell him. Here’s hoping she’s got an ongoing role in future episodes, I enjoyed her spirit.

Meanwhile, Ragnar is up to his old tricks, stirring the shit with everyone. He seems to have accepted he’s not the big cheese he used to be, and it doesn’t seem to be an act. Even if he’s got things back together after his wandering, he’s lost some of his bravado and recognizes the irony in the world passing him by. Ragnar knows he’s no longer invincible and he’s come to appreciate the bonds of family and friendship. At the same time, these bonds are all but played out. As Bjorn points out, it’s always been about him…or was. He’ll have to come to terms with his shortcomings and mistakes, the ghosts of his past coming back to haunt him. His final scene with Floki really hit home — all the boat-builder every really wanted.

“No regrets. And yet, every regret.”

As much as Floki and Ragnar’s exchange tugged at the heartstrings Ragnar and Lagethera’s was equally heartbreaking. Here, Ragnar is completely vulnerable and bares his emotions. “I wish I had never left our farm,” he says. The pair agree that there should be no regrets, but Lagertha says it best: “And yet, every regret.” The pair of them wouldn’t really have been content living out their lives as farmers but at the same time, fame and power cost them their relationship. The pain comes from thinking of the middle ground that could have been.

You get the feeling that Ivar and Ragnar are in similar places mentally, but headed in opposite directions — kindred spirits at crossroads in their lives. They are the outsiders. There’s some awesome symbology at the end of the episode as Ragnar returns to the tree where it all began to end his life. Just when he’s about to check out, Odin’s raven cuts him down. As Ragnar lies on the ground, defeated, Ivar climbs into the throne. The best shot of the episode features the pair staring at one another, man to man. It’s not over yet.