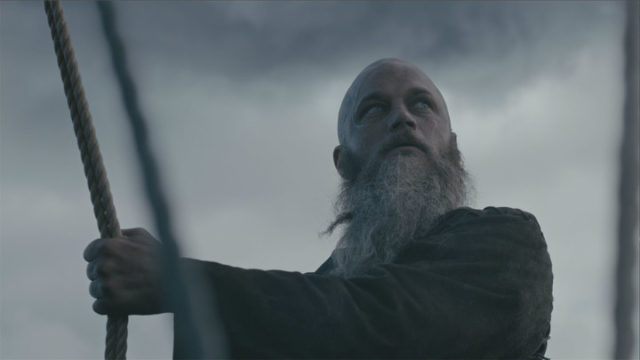 The hits just keep rolling in for Ragnar. In the midst of looking for a raiding crew, he gets publicly shamed. Although he had it coming, it’s still hard to see Ragnar this way, begging for followers. Bjorn stings the blow a little by offering his father ships, but that’s only after he admits he’d like to settle things with Rollo. It’s beginning to look like Ragnar’s luck really has run out. He’s living on the outskirts of town like a beggar and when Harald and Halfdan show up, it’s yet another blow against our beloved Vikings.

Sigurd is a total piece of work, but you get the impression from the dinner scene that this is the result of a broken home — the boys are well aware of their mother’s rocky affair with Harbard and Sigurd at least hasn’t forgiven. Aslaug’s favoritism toward Ivar has created a rift between the brothers that Margrethe continues to widen.

“She’s terrified of him,” Sigurd says after he convinces the girl to tell him about Ivar’s inability to satisfy her.

The going away party promises a showdown of the ages between Aslaug and Lagertha. I would say Ragnar’s return is the catalyst, but we saw Lagertha and Astrid prepping before he ever showed up. Was she waiting for Bjorn to leave all along? “I never forget anything.” It’s going down.

I’m really loving the growing relationship between Ragnar and Ivar that I touched on at the end of last episode “You’re a loser,” Ivar says as they watch Bjorn sailing out of the fjord. “Why don’t you come help me lift, cripple boy?” There’s a foreboding moment when Ivar looks at a coin of King Ecbert, a shadow of the reckoning to come.

There’s not a lot going on with Bjorn (yet), although I expect that to change next week as he reunites with Rollo. You really get the feeling he’s come into his own now as he sails off to make a name for himself and fulfill his destiny. The real question is who’s not going to make it back from the trip?

With Bjorn gone, Ragnar returns to Kattegat and continues to embarrass himself, buying sailors. I would doubt their loyalty, but judging by the storm at the end of the episode, not many of them will make it to England anyway.

The dynamic characters are what makes Vikings an amazing show. Aslaug is pissed and ready to give Ragnar hell, but when the confrontation between them finally goes down, it’s surprisingly tender. Her venom melts away in the face of his sincerity. That’s really been the focus of the first two episodes: people living with the mistakes of their past and coming to terms with their ghosts.

On the other end of the spectrum is Ivar, who still learning to deal with his demons. He’s another great example of awesome characterization: part monster, part broken young man who just wants to be loved (not pitied) and wants to prove himself. You can’t help but root for him during his heartfelt talk with Aslaug when he tell her he’d rather die as a man for a day than live a lifetime in pity.

In the following scene, when he hobbles toward the longboat and stumbles, we see his determination. Later on, this is even more apparent when he admits his terror for water. Aslaug has come to an understanding that she’s got to let him go, no matter the outcome. We also see Ragnar’s tough love as he refuses to help him up and has only one thing to say:

And then all hell breaks lose.