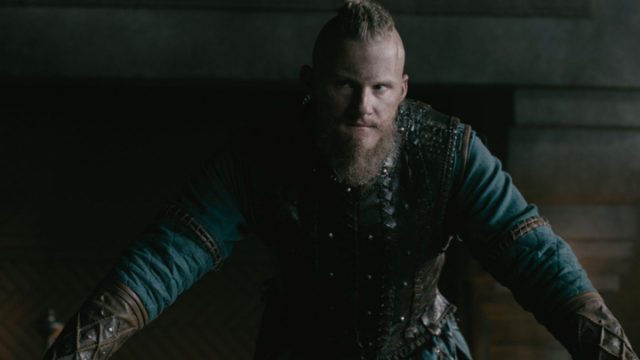 This episode had a lot of things going on with intense action all around. I admit I was a little disappointed that the baptism by hurricane didn’t give Ivar the use of his legs. I wasn’t surprised, either, but have a hard time believing he’s ever going to rise to prominence in the Viking society as he currently is. I know they want to place an emphasis on his cunning, but it’s still a warrior society where power is held by strength. Historically speaking, Ivar likely suffered some leg injury during his life to get the name “Boneless” or had a kind of brittle bone disease, but he was still able to stand and fight. His character reminds me of Sand dan Glokta in Joe Abercrombie’s First Law Trilogy — an awful person you can’t help but root for, who succeed despite their raw deals. Based on Ragnar trying to get him to accept his lot in life, I don’t think we’ll see much physical change in Ivar and it will be interesting to see how the show handles this moving forward.

The end of the road

Ragnar’s plans are dashed just like his ships on the English beach. It seems he’s finally accepted his fate. After leading his ragtag band on a wild goose chase, he and Ivar slaughter them in their sleep. For me, this seemed counterintuitive to Ragnar’s quest for redemption, but I guess self-preservation won out, at least until he can get an audience with King Ecbert. There is no going back now. Although he tells Ivar he doesn’t accept the judgment of the gods, that’s exactly what he’s doing by giving himself up.

A cripple by any other name

Ivar is a cold-blooded killer. In spite of his handicap, he’s not a bad warrior, at least when his opponents are asleep and unsuspecting. When he confronts the last girl, I got the feeling he would have spared her, before his encounter with Margrethe anyway. The relationship between Ragnar and Ivar has reached its peak, just when Ragnar is about to exit this world. Ivar understands his father and his admiration has grown to love. I’m interested to see how Ivar navigates this foreign land and wins his freedom. It would also be interesting to see Ivar and Alfred meet, since they’re both heir apparent of their respective cultures. I wonder if Magnus will come into play, too? The way things are set up, it will be years still before the great Viking invasion of England. I’m betting we get treated to another fast forward at the end of this season.

Lagertha’s vengeance is a long time coming — almost too long, if you ask me. Why is she just now deciding Aslaug isn’t fit to lead? Did she hold back all those years out of respect for Ragnar? It doesn’t entirely make sense. The confusion continues when she orders the attack to stop. Is it because she regrets her decision or because she thinks she’s won and wants to spare her future subjects? It appears Aslaug is going to surrender, but I also wouldn’t be surprised if she flips that sword around and stabs Lagertha with it. This is going to make for an interesting family dynamic when Bjorn gets home — especially since Torvi sided with Lagertha.

Speaking of Bjorn, I’m glad that they brought him and Rollo back together. The whole dungeon thing wasn’t much of a cover up — we all knew he was going to set sail if he got the chance. The boat initiation threw me off a little bit, though. On one hand, I didn’t think that they’d wack Rollo off that fast, but on the other, I could understand it. The move reminded me of the Iron Islanders in Game of Thrones — drowning their new kings before they can take they crown. It felt like some kind of Vikings baptism, and also a little bit of payback from Bjorn and Floki. I still don’t think born-again Rollo will survive the trip. He’s a prime example of the grass always being greener on the other side of the fence and he’s irrevocably changed sides now.