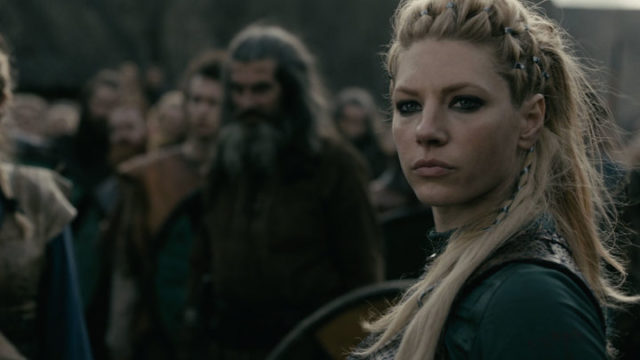 Vikings Season 4 Episode 14 Review: In the Uncertain Hour Before the Morning

I don’t even know where to begin — although short on action, this was one of the most pivotal episodes of Vikings to date, right up there with Ragnar’s fake funeral in the first half of the season when Rollo, Floki and Lagertha conversed with his casket. This is why I watch Vikings.

First, Lagertha’s takeover. Hell hath no fury like a woman scorned, eh? Aslaug’s death caught me off guard — I fully expected Lagertha to let the queen go. In that last moment when we saw her face, I looked for Aslaug’s fox grin, not an arrow to the back. Reflecting on the act, however, it was the only sensible move for Lagertha to make. There was no way Aslaug would sit back and be content losing her throne. Even so, I’m not expecting Lagertha to last much longer. The question will be how she meets her end — I don’t see anyone betraying her again, and I also don’t think the sons of Ragnar will do it.

As a brief side note before we get into the real meat of the story, I think we can expect much more from Magnus. Was Ragnar lying about not being his father? I’m not sure. I do know that no matter who much of a cry baby he seemed, he’s likely to toughen up and get his revenge. I’m looking forward to seeing where they take his character.

The scenes between Ecbert and Ragnar were masterfully done. We got a full spectrum of emotions: happiness, anger, regret, camaraderie and despair. Things wax surprisingly philosophical between the pair of kings in their drunken conversation. These are two men who have used religion when it was convenient and are now finding in their old age that they cannot cling to these rotting foundations of faith. Despite all they’ve achieved, they wonder if it meant anything; if their legacy will survive.

I enjoyed seeing these two interact without all of the treachery and double-dealing. We got Ragnar and Ecbert in their most genuine, authentic states, more real than they’ve been perhaps with anyone else, ever. Men like these don’t gain power and achieve greatness without a price and as the conversation turns to their mutual love for Athelstan we see the cost weighing heavily upon them both. Ragnar hasn’t ever forgiven himself for Athelstan’s death, even if he forgave Floki. Even without him telling Ecbert, you know Ragnar’s death will weigh on the King of Wessex just as much. Aside from Alfred, Ragnar is likely the only person Ecbert has ever really loved. When he kneels before the altar, he expresses legitimate sorrow for Ragnar’s death and indeed, is confesses he is unable to give the order.

But alas, the pair of old warmongers are ending their dynamic duo with a slam-bang finish. Ragnar will create the catalyst for his sons to vicariously carry out his revenge all the while allowing Ecbert to squash out Aella once and for all.

There’s only one problem: will Ivar settle for anything less than the total conquest of all England?