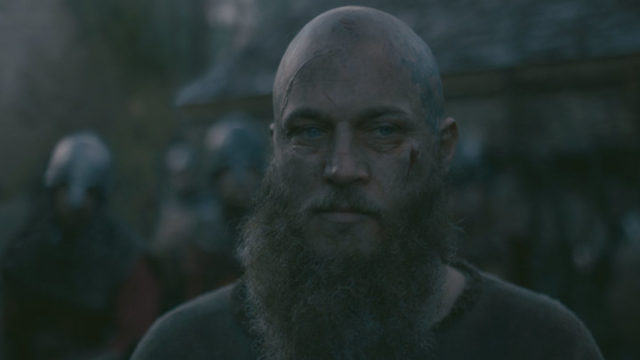 Official Synopsis: Ragnar and Ivar plot against the Saxons and reach a new level of understanding.

In the ongoing battle of wits between Ecbert and Ragnar, it seems Ragnar gets the last laugh. After last week’s episode worked to show the friendship between the two old rivals, Ragnar turns around and sends Ivar home with instructions to exact revenge, not on Aella, but on Ecbert. The double-cross brought to mind the phrase “it’s just good business.” Does Ragnar like Ecbert? Yes. Does he respect him? Probably. None of this matters, though, because Ragnar can’t allow the slaughter of the settlement to go unpunished, tarnishing his legacy. It’s important enough he’ll die for it.

But one quick note before we get to that. I thought the scene with Ivar and Alfred playing chess was an excellent piece of foreshadowing. Ivar thinks he’s got the upper hand then Alfred turns around and surprises him. I got the feeling Ivar won’t make the same mistake the next time the pair face off against one another. This was an excellent extension of the broader metaphorical chess match going on between Ecbert and Ragnar.

I enjoyed the continued discussion of faith between Ecbert and Ragnar. After confessing he is faithless, Ecbert asks him why he’ll carry his masquerade of pagan piety to the grave. Ragnar’s answer is one of his greatest lines of the series: “Because my sons believe it, and my people believe it.” Although Ragnar will curse the Seer and disavow Odin himself, he’ll turn around scream about Valhalla and Valkyries to all the witnesses at his execution. All the while Ecbert smiles on, with no clue what’s coming, a victim of Ragnar’s greatest gambit.

Til death do us part

Then came the moment we’ve anticipated and dreaded all season. Ragnar’s death was executed (no pun intended) to perfection. It reminded me of the execution scene in Braveheart, although it felt heavier and less inspirational. This was an intentional move by the show’s creators. As Aella tortures Ragnar in the hopes of making him confess his sins, you’re horrified by what he’s going through, but you don’t exactly sympathize with him. The flashbacks make us miss our favorite Viking and all the good times we’ve shared, but at the same time, we’ve known all along he had it coming. Ragnar hasn’t been a hero in our eyes for a long time.

In a way, the entire Vikings show has led to this moment. Ragnar’s death is the catalyst for one of history’s greatest invasions, but it would be meaningless without three and a half seasons establishing his rise and fall from power. We had to experience the legacy to appreciate it. No matter what he became, what Ragnar Lothbrok left behind was greatness.

Give in to your hate

And thus completes Ivar’s fall to the dark side. Between Ragnar’s parting words to his son and Ivar learning of his mother’s death, his path is set. It pains me to say it, but Lagertha’s day are numbered. I’m predicting she and her shieldmaidens come to a less than glorious ending, unfortunately.

In the final scene of one of the series’ greatest episodes, the meaning is clear as Ivar crushes the knight in his hand. Blood is coming.