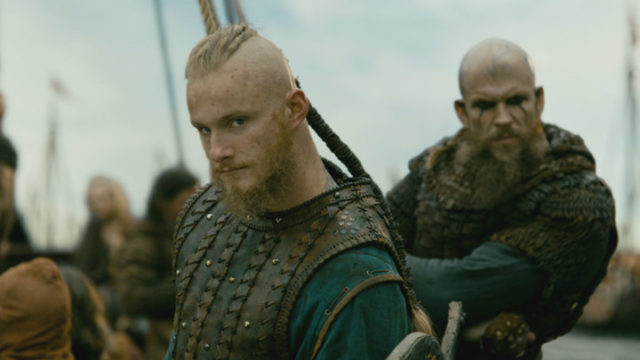 Official Synopsis: Bjorn’s fleet sails onward and launches a surprise attack. Back in Kattegat, Lagertha continues in her quest for power.

With the sole focus being on Ragnar last week, Crossing had a lot going on to catch us up with everyone else.

The Burden of Ruling

At first glance, it looks like Lagertha has her act together. She’s taken back Kattegat with relatively little bloodshed, disposed of her most hated enemy and is beloved by her new/old subjects. Of course, that was before Ivar returned.

Vowing vengeance against his mother, Ivar puts Lagertha in a tight spot. Her love for Ragnar prevents her from killing her sons, but at the same time she knows she cannot maintain rule with them alive.

As the episode progresses, I’m not sure that even matters to her.

In the bedroom scene, Lagertha once again allows her regrets from the past to resurface while conversing with Astrid. She’s back in her and Ragnar’s old bed, but it’s not the same. She’s queen, but despite all of her shieldmaiden badassness, you get the feeling she finds the position empty, since she can’t be Ragnar’s queen.

When Ragnar speaks to her in the night, Lagertha cries out to him, lost within herself. If he isn’t returning to sit in the hall beside her, then what is left? As much as she cares for Astrid, the shieldmaiden will never fill the emptiness Ragnar left behind.

I once was lost

Meanwhile, another one of our old friends has lost his bearing. When we open up to Bjorn’s fleet, Floki admits to Helga he is an “empty vessel, I need something to fill me up.” Unlike Lagertha, I found this surprising, given that Floki’s character has only been motivated by Ragnar’s love since the show started. Now that he knows he has that, it’s interesting that he’s looking for something. In the mosque scene, when he saves the worshipers from Harald and Halfdan, we’re ironically led to believe that it’s a religious rebirth he’s after. Wouldn’t that be something?

Even so, he’s adamant about not having another child or having Helga keep the Muslim girl, who is sure to be a catalyst down the road. The only thing keeping Halfdan from killing Floki is Harald’s respect for the boat-builder. If Floki finds a new religion, he may not last long.

Speaking of Harald and Halfdan, they’re up to their old fair-weather tricks again. Depending on how Bjorn proceeds now that they’ve found the Mediterranean, their coup may come sooner than later. I’m betting either Hvitserk or Rollo meets their end from the brothers.

From sea to shining sea

Bjorn is satisfied with pillaging the city, yes, but it isn’t until they lay eyes on the Mediterranean that he celebrates his accomplishment. We have scant time to revel in the achievement, however.

To paraphrase another great show, “dark wings bring dark words” to the sons of Ragnar. The ravens beat Ragnar’s voice on the wind and soon after, Odin himself appears to each of the brothers. He brings confirmation of Ragnar’s death, yes, but also a strong hand of comfort.

I’m interested to see how Bjorn will respond. Knowing his father is dead, will he return home just as his dreams are about to come to pass? As Ragnar eerily foretold in his last meeting with his eldest son: you will have to make your own choices, live with your own mistakes. Will Bjorn do what Ragnar could not and abandon vengeance in the face of untold wealth and fame?

This week, we got the grand ending Ragnar deserved. It gave me chills listening to the Vikings of Vikings roaring out his last words in the wake of the storm. In the end, Ragnar got what he wanted: his legacy will live on, written with the blood of his enemies.