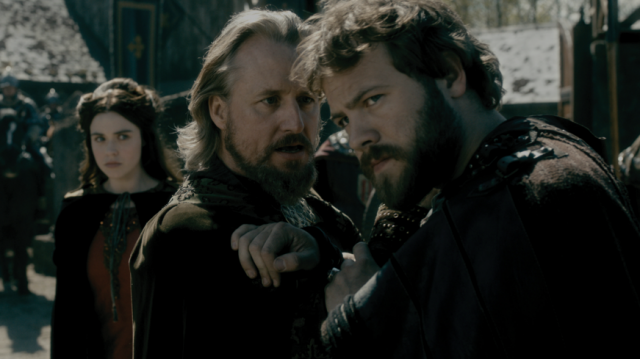 Official Synopsis: As Ragnar and Floki remain at odds in Kattegat, Rollo makes great efforts in Paris to win over his new bride, Princess Gisla. Bjorn’s survival skills are put to the test in the wilderness, while King Ecbert sets the task for his son Aethelwulf to rescue Queen Kwenthrith from opposing forces in Mercia.

Recap
There’s so much going on and so many plot threads to keep up with that we hardly made any progress this episode. In the end, when the teaser for next week ran, we were promised much of the same thing we were supposed to get this week. I’ll save judgment until the end of the season (especially since it’s going to be longer than the first three were), but I hope we start getting a full meal instead of appetizers each week.

Things open up with Bjorn on his epic hero’s quest…which amounted to nothing more than an ice fishing derby so far. While Bjorn channels his Leo DiCaprio from Revenant, I’m just waiting for that bear to come out of nowhere and start whooping on him. So far so good — he’s found the cabin and has something to eat, but it looks like nefarious assassins are soon to be headed his way as well.

Poor Helga. Her loyalties are split down the middle. When she set Floki free, I bet she hoped he’d run away and never return. Unfortunately, Floki’s not a fish and Ragnar’s sons are smarter than the old boat builder gave them credit for. Ragnar’s showed his soft side by taking food to Helga and her child but it seems it wasn’t enough. It was heartbreaking to see them bury Angrboda but also reinforced our belief in Ragnar’s compassionate side. Deep down, I bet he was hoping Floki just disappeared. No matter how bad he wants vengeance for Athelstan, you know he still has feelings for his old friend. It’s a theme I think we’ll explore all season: Ragnar making the final transformation from simple farmer to ruler of the Vikings. We can tell already he’s struggling to be both. Can he be a good man and a successful monarch?

You also get the feeling that Ragnar’s cracking a little bit from the pressures of power. Although he has yet to confront Aslaug directly about her fling with Harbard, he does loose his temper and knock her around pretty good. You know she’s not going to put up with that nonsense. I suspect the queen and king will be going head-to-head soon enough.

We missed out on Lagertha this week, but got an extended look at the political scene in in jolly old England. Queen Kwenthrith is imprisoned by a traitorous council of nobles and it’s up to Athelwulf to ride to the rescue. It’s interesting to note he still hasn’t earned the respect of Wessex’s nobles but had enough brains and gumption to speak out against King Ecbert and go with his own plan. Although he was right, he took a pretty good whooping from that Mercian solider and is pretty lucky he didn’t get his face flattened. In the race to kill/rescue the queen and her son, Magnus, I felt a little bloodthirsty cheering Kwenthrith on while she bashed her female guards’s face in with a 2×4. Aethelwulf got his butt kicked pretty good, but he came through for Kwenthrith in the end. I wouldn’t count on her returning the favor if the roles were ever reversed though.

King Ecbert clearly has plans for Magnus but what game is he playing at with Judith? You know he doesn’t give anything for nothing and I have to wonder if it’s not more than coincidence that Judith’s new teacher looks like Athelstan reborn.

Continuing our jump across western Europe, we find Rollo struggling to convey his brilliant defensive plan to Count Odo. The poor guy, he embarasses himself by getting a pansy haircut and some very un-Viking-like clothes, but all that wench Gisla does is laugh at him. The big surprise this week comes from Therese, who is double dealing with Odo, subjecting herself to his weird torture fetish to get inside info for her husband (?). There are quite a few players on the board in Paris and Rollo’s going to have to sharpen up his diplomacy skills if he wants to come up on top.