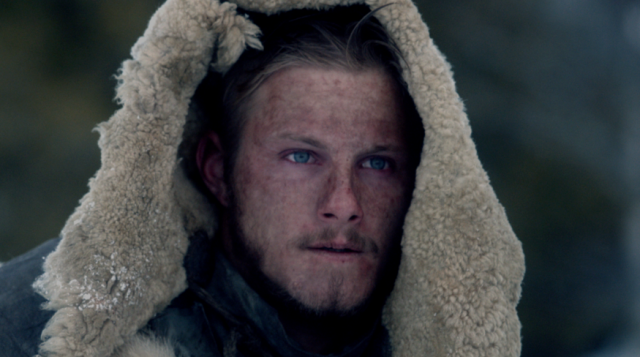 Official Synopsis: Ragnar tells Floki of a heavy price he has paid for his actions but as Floki remains a prisoner, a mysterious visitor to Ragnar counsels mercy. Intrigue prevails at the French Court as Rollo finds an unlikely ally in Count Odo, but can’t escape the contempt of his new bride. Bjorn must fight a fierce opponent in the wilderness but will he survive the threat that Erlendur and Kalf are sending his way?

Recap
Another week filled with intrigue and excitement from all angles leaving us slavering for Thursday to get here asap.

Thiings started off all hot and steamy with Kalf and Lagertha. We’re made to believe Kalf is a big softie who’s got a major fan boy crush on Lagertha, but in the next scene, he turns around and hires a hitman to take out his lover’s daughter. No matter if his feelings for Lagertha are true, she’s gonna lay the hurt on him if she finds out he’s sent a berserk after her baby boy.

Speaking of berserks, I’ve been waiting for them to make it into the series! (As a focus point, anyway). The most famous of all Viking warriors, the name berserk or “bersark” means bear warrior in Scandinavian (and yes, I know that before tonight, I just didn’t Wiki it to sound cool, gosh). I think it’s an awesome parallel that Bjorn faces a real bear (even though that turned out to be quite a bit less of an epic showdown than it was billed as for over a year) and a berserker. Instead of his final test, the bear was merely a stepping stone and it seems like Bjorn is following the berserker path as well, or maybe he just really likes his new bear skin coat. Next week’s fight better be a whole lot better than Bjorn vs. Bear, though.

Even if the bear battle was a bummer, (say that five times fast) episode four was jam-packed with epicness. ATHELSTAN! It’s interesting to note how much he held everyone together as the series progresses without our favorite monk. His appearance draws another parallel, this time between the two kings, although I’m not sure what it serves for Athelstan to show himself in a vision to Ecbert, but we’ll see. As a side note, I loved the musical score during this scene.

Do you think Floki would still want to be spared knowing it was Athlestan’s Christian mercy that swayed Ragnar to cut the boat-builder down? No matter Floki’s sins, you can’t help but feel bad for the guy and his family. I wonder if the death of his daughter will shake his faith in the gods? Either way, he’s going to have to find a new Vikings to build boats for I think.

Rollo continues to struggle and his ignorance exploited by the Emperor and Count Odo. He didn’t do much to dispel the Vikings stereotype, either, when the threw a tantrum during his studies. Still funny, though. It’s too bad Rollo’s tutor became a vent not only for the Duke’s issues with the language, but his rocky marital relationship as well. I love the political intrigue we’re getting between the French, English and Norse courts. Everyone is out to get one another. Who’ll be left standing when the final die is cast?

Judith and Ecbert, Athelwulf and Kwenthrith. My, my, what a mess. Luckily, no matter how messed up things get, the petty English monarchs can always rely on a mutual loathing for Ragnar to bring them together.

With cliffhangers abound the stakes continue to rise. Here’s a snippet of what we’ve got in store: Bjorn faces the battle of his life, Floki must get out of Dodge City, Ragnar is tempted by the servant girl and Rollo promises to wow the pantyhose off everyone in the French Court with his newfound tongue. Hang on tight, everyone!