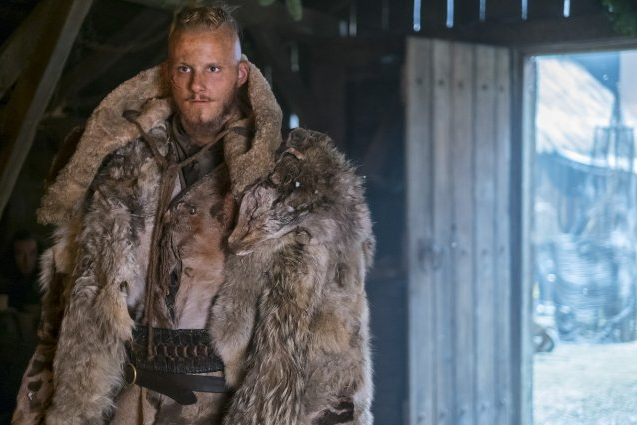 Official Synopsis: The Yule Log burns in the Great Hall in Kattegat and, though Floki must remain out in the cold, other visitors are welcomed, among them a Norwegian King and Bjorn, with a new partner we’ve met before. King Aelle visits Wessex for Christmas and is not impressed with how family relations are developing. In Paris, Rollo’s future hangs in the balance — can he win-over his new bride, Gisla, as a Papal Delegation arrives to arrange a divorce?

Holy sweet mercy! Episode 4 was full of action and featured some of our favorite Vikings taking names every which way.

Let’s open things up with Rollo: He’s spent the entire season struggling to learn the Frankish language and culture, all while being spurned by his feisty wife, Gisla. But just when the Papal Delegation shows up, he gets his moment in the spotlight! Using his newfound grasp of the language to do some sweet talking, Rollo woos fair maiden Gisla and…needless to say the marriage is now official and consummated. Quite a few times — including a Christmas dinner frolic in the pantry. Mah boy!

We come across Bjorn in the midst of giving himself some sweet new ink before his journey home to the family Yule party. The equal-parts epic and gruesome fight between the prince and the berserker showcased Bjorn’s maturity and growth as a warrior. No guts, no glory! (Heh, get it?) He’s calm in the face of death and innovative in victory — two traits that will serve him well in the future. (Notice he’s adopted the young Ragnar braided mohawk hairstyle?)

I’m not sure about Bjorn’s decision to bring home a new wife, though. If he knew where the berserker’s ring came from, why not wack off Erlendur’s head right then and there? It takes quite the pair of stones to swoop in and steal your murderer’s wife out from under his nose.

While his brother and son are coming into their own, only the gods know what’s going on with Ragnar. Has he finally cracked? Or has Yidu helped fix him in the head as she said her eastern medicine would? Ragnar put on quite the show in his little cabin, but maybe that’s more about getting stoned than getting a grip on things.

I love how real the relationship between Ragnar, Ivar and Aslaug is. It’s totally tragic and totally believable. They both want what’s best for their son, but in this case, I thought Asluag knew best. After she took him to Floki, I’m not so sure. What did the seer show him? Is the trickster grateful his life was spared? Will he honor Asluag’s wishes or just use Ivar as a way to get back at Ragnar?

Ah, the holidays. What would they be without feasts and family fighting with one another? King Aella is the ultimate party-pooper, telling Kwenfrith he’s going to kill her son and yelling at Judith. You get the felling he thinks he’s fallen into a viper’s den watching all of the cheating couples mingle around him. As I’ve said a dozen times before, without a shared enmity for Ragnar, they’d be at each other’s throats (and still might before it’s all said and done).

I couldn’t help but appreciate the contrast between the Frankish Epiphany dinner and the Vikings Yule festivities (although Rollo and Gisla brought a little pagan celebration to the stuffy Christian party). The writers and producers of Vikings do a great job contrasting the two cultures without ramming it down your throat. Also, who didn’t love seeing Ragnar’s face all painted up like a luchador mask?

Just when things start to settle down, a new threat sails into town. The coming of King Harold Finehair will undoubtedly test the loyalties of our Vikings (here’s looking at you, Aslaug and Floki) and it will be interesting to see how Ragnar deals with another Norse threat on his front door. Looks like Bjorn got home just in time.