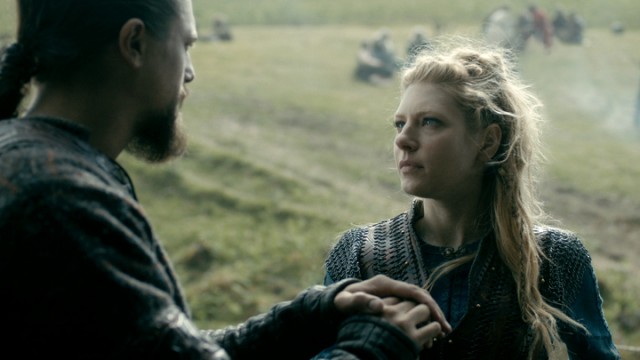 Official Synopsis: There’s an air of betrayal at Court in Paris and Wessex as those whom Odo trusts plot against him and Ecbert agrees to support Kwenthrith in Mercia, but is Ecbert a true ally? Ragnar confides in Yidu his darkest secret.

Recap
I’m beginning to think there’s no depth to the madness and chaos we’ll reach in this season of Vikings.

Stone-cold shieldmaiden Lagertha steals the spotlight this week. Although that puts things a bit out of order, she’s our show runner and gets her dues first.

Poor, foolish Kalf. He got caught up in this fairy tale he convinced himself was reality and was blind to the truth (although Lagertha did an excellent job playing the role of star-crossed lover). Turns out Kalf wasn’t half as sly as I gave him credit for — his crush cost him his life. It was great to see Lagertha assuming her rightful place, surrounded by her shieldmaidens. If I was Erlendur, I’d be all for getting out of town as fast as I could. (Especially now that Bjorn knows where the berserker’s ring came from).

Relationships are also in turmoil in England with the crazy love triangles surrounding Ecbert, Judith, Athelwulf and Kwenthrith growing closer to the surface. King Aella doesn’t seem thrilled about invading Mercia and Kwenthrith obviously has her doubts about Ecbert sticking to his word but with the Vikings focused on Paris, when will they ever have time to bring the English together with a friendly raid?

Now that we know what’s really eating Ragnar up, the return to England may be sooner than expected. Of all the things he’s been through, I really didn’t think the loss of the settlement in Britain would be the one he’d get hung up on. Yidu is clearly taking the place of Athelstan as his confidant, but does the Emperor’s daughter really have his best interests in mind or his she going to leave him a paranoid drug addict?

Speaking of rulers who’re losing it. Emperor Charles looks like he’s about to crack. Maybe I don’t give him enough. Look how wrong I was about Kalf! Everyone is making a play for his throne (Gisla and Rollo including it seems), but the Vikings may put a wrinkle in those schemes when they make their return. As we learned, Paris is the gateway to all of Frankia — if it falls, there’s nothing stopping the Northmen from raiding up and down every Frankish river.

Harold Finehair is a sly fox but Bjorn is keeping a close eye on him. He may be hard-pressed to withstand the threat of a combined Harold, Halfdan, Floki and Aslaug coup unless his dad pulls his head out.

Looks like Ivar has more Ragnar in him than we thought! I realize the others were picking on him, but he’s going to have a hard time coming by friend and playmates if he wacks them with an axe them every time he doesn’t get his way. Good on him for standing up for himself, though. It’ll be interesting to see how he grows under Floki’s tutelage.

And, if you haven’t heard the news, Vikings is officially back for Season 5! SKOL!