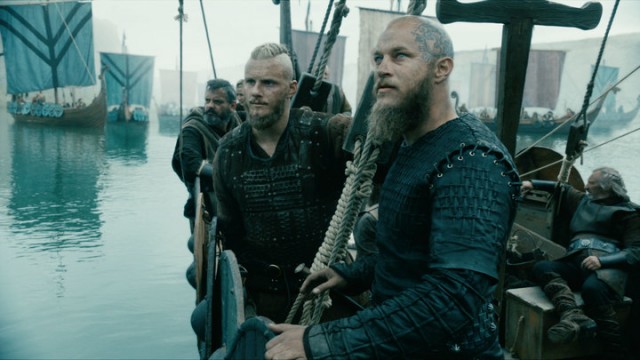 Official Synopsis: Defeat for the Vikings calls Ragnar’s leadership into question as they evacuate their camp and move back down-river. Ragnar himself remains inscrutable until he orders the fleet to beach at a cliff face and unveils an ingenious plan. Rollo and Gisla have news that strengthens Rollo’s position at the French Court whilst Count Odo fails to identify his true enemies, with fatal consequences.

Recap
This episode was all about the fury of the women right from the get-go. You better watch yoself around Lagertha, Mr. Finehair. She might be Ragnar’s ex, but she’s got his back no matter what, even when he’s a crackhead. (A crackhead who’s really pissing me and Bjorn off.) If he continues this downward spiral, I might actually be happy to see him sent to his grave. He’s really starting to crack from everything and I don’t think anybody is gonna be able to put Humpty Dumpty Viking back together again.

“Let there be portage!”

Everyone’s super pissed about the horrendous defeat at Rollo’s towers and when Ragnar suggests they make camp on some cliffs, both his sanity and leadership come into question. But even hopped up on Chinese mushroom-leaf, Ragnar is still brilliant. His master plan is to haul the boats up the cliff and then portage (fancy word that’s the name of this episode and means to carry a boat overland to put it back in the water) them to the other side of the towers.

There’s a tense moments between Ragnar and Floki when the king asks his boat builder to make it happen. Floki is pretty sarcastic in his answer, so I’m not sure how grateful he is for Ragnar saving his life. He seems to have something up his sleeve, but who can say what?

As the master plan unfold and the rest of the Vikings begin to catch the vision, Harold and Halfdan REALLY catch the vision. They turn into uber-ass-kissers and Ragnar takes it all in like “yeah, you should feel stupid.” I’ve said it before and I’ll say it verbatim again: even hopped up on Chinese mushroom-leaf, Ragnar is still brilliant.

Roland and Odo, those backstabbing dirtbags throw Rollo under the bus hardcore now that (at least as far as they know) the threat of Vikings invasion is over. Turns out that it’s just a ploy to get Odo ousted, though. Like the sly double-crossing mistress she is Therese tricks Odo into his own chains and Roland proceeds to give him the whooping of his life. So long, Odo.

Something tells me that Odo was far less dangerous than the dynamic incestuous duo of Roland and Therese. I don’t think Emperor Charles has any idea the mess he’s in. You read it here first: I’m predicting Roland and Therese overthrow the Emperor and Rollo and Gisla move north where they found the kingdom of Normandy.

I just can’t wait to be king.

As predicted, Kwenthrith is furious when King Ecbert reveals his takover of her kingdom. I thought her pregnancy would throw a wrench in Ecbert’s plans to get rid of her, but turns out he’s got Judith around to do his dirty work. The ex-queen fell for the greatest villain foible: too much talkie, not enough stabby. Kwethrith’s dying words were very “et tu, Brute?” and definitely leave Judith shaken. She realizes, as she says, what Ecbert has made her become and she doesn’t like it. I wonder what the fate of poor, young Magnus will be now?

Thanks to a vigilant Sigurd, momma Aslaug busted Harbard in the midst of his whoring around. “I don’t sleep with every woman, only those who need me,” is probably the wrong thing to say to a woman who’s destroying her bedroom when you walk in. Hopefully, Aslaug’s rose-colored “Harbard is uber-spiritual” glasses are broken for good. She’d better hope Ragnar doesn’t find out about this, cuz he’s a man on the edge lately.

Speaking of Ragnar being on edge, we just saw, in my opinion, his darkest scene yet. Sure, the Blood Eagle was…bloodier, but it was somewhat justified. Poor, sweet Yidu takes things too far and the blood on Ragnar’s hands over the Wessex settlement continues to stain even darker. The cold-blooded murder was brutal on it’s own, but even more chilling when we turn around and see his sons are witness to his manic homicide. Nobody’s hands are clean anymore

P.S. There’s so many threads going on with so many different characters that we can’t keep track of them all, but I have a feeling things with Bjorn and Erlendur are going to be coming to head soon