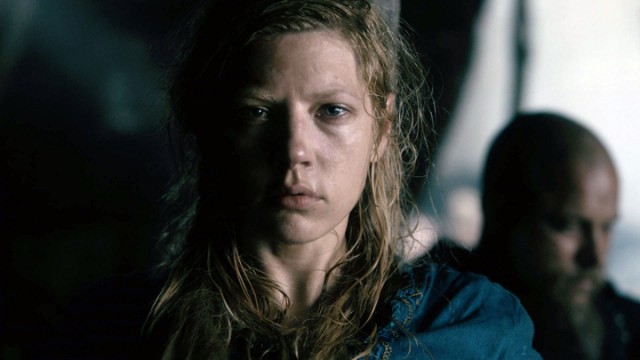 Official Synopsis: The labors of the Vikings eventually bear fruit as, within sight of Paris, they re-launch their boats but this time along with some interesting structures that Floki has made. Aethelwulf and Alfred eventually arrive in Rome and honors are conferred by Pope Leo but relations are not so cordial in Wessex between King Ecbert and the disgruntled King Aelle.

Recap
Just when we start covering the violent world we’re watching, the Harald and Halfdan open things up with one of the most brutals raids to date. The trek through the forest is providing to be a daunting one, especially on one of our favorite Vikings.

In one of the most heartbreaking scenes of the Vikings series, Lagertha miscarries her child and Ragnar and Bjorn rush to comfort her. There’s a brief moment when you see Lagertha and Ragnar connect again, but reality sinks in and she tells him to leave. Nevertheless, they stay by her side as she stares off into the distance, seemingly coming to a bitter realization.

Floki experiences another vision of Aslaug, making me think he’s connect to her, not Harbard as I first thought. I’m interested to see how this connection unfolds and how the queen will be affected by her fallout with the promiscuous bard.

Alfred reaches Rome and Ecbert is anointed king of both Wessex and Mercia in another parralel sequence of scenes. As his grandfather is crowned, Alfred becomes a consul of Rome. Back in England, King Aelle seems less than thrilled about the proceedings and his short end of the stick. Ecbert wastes no time throwing around his newfound power and putting his former ally in place squarely beneath him. It’s bitter pill Aelle won’t swallow without a war, I don’t think.

Back at the Frankish court, the Emperor formally announces Gisla’s pregnancy and promotes Roland to count. Playing right into Roland and Therese’s hand, he requests the brother for the sister to be the Emperor’s mistress. Gisla knows what’s up though and voices her concerns to Rollo. The Duke has his own worries though, when the princess cuts him off in the bed, leaving him wistfully wishing for at least some part of northern culture. But it turns out the Emperor is batting for the other team and Roland is the true object of his desire. Little does he know what’s waiting just around the river bend.

After weeks of toil, the Vikings finally reach the Seine, on the right side of Rollo’s towers. With the battle so close at hand, Erlendur is desperate for his revenge, but Torvid does her best to (literally) shield Bjorn from her former husband. He finally cracks and, in a rotten twist, orders her to kill Bjorn. That’s the last mistake he’ll ever make. After a brief dramatic moment, she turns around and drops him with a bolt to the heart. There’s a sense of closure as Bjorn places Horik’s ring on the end of the shaft and nods up at his father, who looks on death’s door. In an awesome twist of fate, Torvid is shown carrying the crossbow into battle as the Vikings prepare to attack the city.

Speaking of heart-wrenching scenes, Kattegat is sure turning into a hell hole, isn’t it? Sigurd finds Siggi’s body in the creek but when he goes to tell his mother, she’s so busy arguing with Ivar and moping that it barely registers. Those two are quite the pair — the seeds of Aslaug’s coddling have sprouted into a rotten little monster. Sigurd (and myself for that matter) has had more than he can fill of their crap.

Ragnar has reached the last of his drug and is miserable trying to kick it, reserving all his strength for the titanic clash with Rollo. Bjorn does his best to help him out and voices a need for his father’s guile to attack Paris. Ragnar, however, has just one goal in mind: to finish off Rollo once and for all. “I have to kill you. I must kill you,” he repeats as they sail toward Paris. Things are about to get real messy.