I realize I’m a little late to the game (or movie?) with this, but wanted to throw my two cents in anyway. Warcraft was one of my first introductions to fantasy as a whole. When my cousins moved next door, I’d go over and watched them play a game on their fancy Windows 98 computer. That game was Warcraft II: Tides of Darkness. 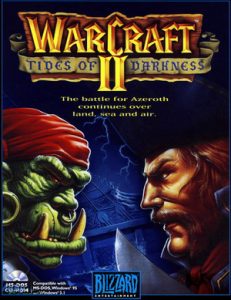 Aww yiss. This is the good stuff.

The little I was allowed to play (after all, I was like 8 and Warcraft was — gasp — rated T for Teen) completely changed my imaginative playtime. Warcraft II’s influence was one of the first steps I can recall taking away from western themes. I couldn’t get enough: I was a gryphon rider for the Alliance, boldly leading my armies to victory on screen or in the front yard. I ran around hacking orcs (trees) with my mighty blade (wooden stake with a hilt nailed on).

Those were the days. Before I had any idea what a Hobbit was, I could tell you all about orcs.

As time passed, I drifted off to other games, however and didn’t pick up Warcraft III until seven to eight years after it released. My cousin (the same who introduced me to Warcraft II) became an absolute World of Warcraft addict and I played a little, but never had enough time (or money for game cards) to get into the game enough for it to be fun. My experience started and ending at the Burning Crusade.

(As a side note, I find I’m too casual of a gamer to really enjoy MMORPGs — all I really care about is getting to the next storyline cut scenes as fast as possilbe).

Long story short: Warcraft was my dark portal into the realm of fantasy, but I soon moved on to different pastures within the genre. I knew I’d probably see Warcraft, but it wasn’t very high on my priority list. Here’s what I thought:

SPOILER ALERT BEYOND THIS POINT! GAAAHHH LOOK OUT!

When Warcraft: Orcs and Humans first came out in 94, I doubt Blizzard ever dreamed Warcraft would become what it has. I’m pretty sure they weren’t planning on an epic franchise, which makes the early game lore a little jumbled (they makes stories to fit games, not games to fit stories, after all). We won’t even get into the whole Warlords of Draenor time loop. That being said I think the director and writers did the best with what they had to work with. The storyline stays semi-close to the original game. Coming from someone who had to look up numerous Wikis to bring myself up to speed on the lore after I saw the movie, the plot was still a little predictable, even if you knew nothing about the world.

Even so, I still found the Warcraft movie entertaining. Durotan’s character arc was the best of the bunch by far. The biggest flaws were with the subplots, especially the forced and completely unbelievable romance between Lothar and Garona. Way too cheesy, contrived and just…weird the way it was set up. Who stars necking someone after their son just died? Is that supposed to help?

Speaking of which, Lothar’s son was another weak subplot that didn’t really need to be there in the first place. I was perplexed that Lothar would nearly burn his arm off trying to rescue his kid only to stand there emotionless when he’s killed. He. Just. Stands. There. No in shock or anything. Doesn’t scream, doesn’t pound on the lightning wall. Just chills like he’s watching it on the big screen with the rest of us. His line at the end after killing Blackhand was also awful. For one, they didn’t even make that a fight and 2. We all know it’s “for his son.” You don’t need to tell us.

Otherwise, my only other real beef was when Garona killed Llane. Really, that’s the best we get? I can tell you exactly what happened because I’ve been there as a writer. Everything was fine and dandy and then all of a sudden someone said (near the end of drafting the script) WAIT! WE FORGOT GARONA HAS TO KILL THE KING! Rather than doing more substantial rewriting, we get the weird, slow-mo conversation between the two and then Garona stabs Llane with her letter opener. Meh. I get where you’re going but still.

The Warcraft movie was beautiful for the most part. The blend between human and orc worked better than I’d expected and there were only a couple of shots where things looked kinda weird. (A couple moves during fights and the one where Lothar confronts the wolf in the forest stands out — should’ve taken a design page out of the Chronicles of Narnia movies there.)

I heard a few people complaining about how Garona was a stereotypical female fantasy creature: The male is huge and ripped and badass and the female is just a slender, scantily dressed human woman with green skin and barely noticeable fangs. That’s often the case but not in this film. Garona looks like that because she IS half human, as we learn. Did the people complaining not see the other female orcs? Draka, Durotan’s wife, looked exactly as a female orc should. C’mon, pull this card somewhere else.

The dwarves weren’t quite as flawless as the orcs and glowing eyes on the elves and the mages looked like a Snapchat filter, but that’s just me being nit-picky.

For the most part, it was just a couple steps above Dungeon Siege: In the Name of the King (sorry, Jason Statham). Luckily the awesome Warcraft action was enough to get over this. I’m a huge Travis Fimmel fan from History’s Vikings (half the reason I went to Warcraft was to see my boy) but think he’s better in that show than he was here. Most of that I attribute to the writing.He did the best with what he had to work with and I hope Warcraft doesn’t doom his movie career.

Props to the orcs actors (especially Toby Kebbell, who played Durotan). I really enjoyed his character I’m sure it’s not as easy as we all think to act on a green screen with little plastic balls stuck to everything you’re wearing or holding.

The good: true to Warcraft roots, solid CGI, great magic and killer action scenes. Without being overly bloody and a gore-fest, you get to see orcs smash heads, throw horses and generally take names in every way possible which is awesome. The final battle featuring Lothar’s gryphon taking names was fantasy name-taking at its finest.

The bad: Sub plots in general sucked. Romance plot was bleh and Lothar and his son was cheesy and cliche. There was some pretty rough dialog, too.

I went more in depth with my problems with the film, but overall it wasn’t bad. It just wasn’t great. Maybe a little overly ambitious in scope? The Warcraft movie is far from the best fantasy film you’ll ever see but it’s far from the worst, too.

Although the effects would have suffered a bit, this is a movie that probably would’ve done better ion the US had it been released 5-8 years ago, at the height of WOW mania. The Warcraft movie was good enough that I’ll give the next one a shot (if it gets a US release, that is) and if I know Blizzard, they’ll up their game (no pun intended) for the next one. A solid film for when you want to kick back and enjoy some good old fashioned fantasy action.